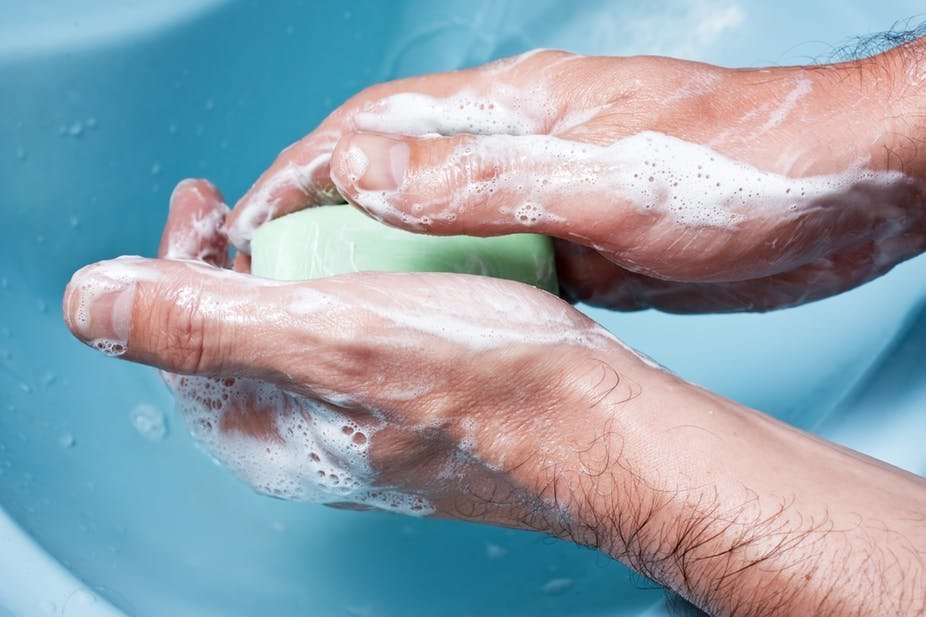 Imagine feeling anxious every time you touched a doorknob or dirty surface – maybe even spending hours washing and scrubbing your hands afterwards, sometimes until they bleed. For sufferers of Obsessive Compulsive Disorder (OCD), especially those with contamination fears, managing the disorder in daily life can be difficult.

The current treatments for this type of OCD are either antidepressants or cognitive behavioural therapy. However, almost 40% of OCD sufferers currently fail to respond to these types of treatments. But my colleagues and I have started researching new and innovative ways to manage and treat OCD – and it might be as simple as using a smartphone app.

We have developed a new treatment app that includes videos that simulate compulsive behaviours (such as hand washing) or which have some similarities to current psychological treatments (such as touching a disgusting object). This may help with reducing anxiety or overcoming contamination fears. The app also has a thumbs up or down system to allow users to rate how they are feeling, how anxious they are, how disgusted they are feeling and how strongly they want to wash their hands.

Diagnoses of this type of OCD are currently done by a clinician using self-report questionnaires – such as the Yale-Brown Obsessive Compulsive scale (YBOCS) and the Obsessive-Compulsive Inventory (OCI-R). These questionnaires ask patients to answer a variety of questions and statements to determine the severity of their OCD symptoms.

Another test is to measure cognitive rigidity and flexibility (how well the brain can adapt to new situations or rules), which recent research found is associated with OCD. The CANTAB Intra-Extra Dimensional Shift test (IED), is another method used to measure OCD severity by testing the cognitive flexibility of OCD sufferers. Understanding the severity of symptoms and levels of cognitive flexibility are important for knowing how well a patient is responding to treatment.

At the moment, treatments for this type of OCD are either selective serotonin re-uptake inhibitors, such as Prozac or Zoloft, or a type of cognitive behaviour therapy called “exposure and response prevention”. During exposure and response prevention therapy, patients are progressively exposed to “contaminated” objects (a toilet seat, for example) until they feel a rise in anxiety. They then avoid performing compulsive behaviours such as excessively and repeatedly washing their hands. This helps the patient experience the decrease of anxiety and overcome their fear, resulting in a less negative reaction to the “contaminated” objects over time. Many patients fail to respond to this treatment – and many may skip therapy because they feel too anxious when thinking about touching contaminated objects.

But therapies using new technology may have the potential to transform OCD treatment. My colleagues and I conducted a recent study using videos accessed via a smartphone app we developed as an alternative to traditional therapies.

We conducted separate tests on three different groups of people using the same smartphone app. Participants in each group watched a prerecorded video of themselves performing different activities. The severity of their OCD symptoms and cognitive flexibility were also measured using the various OCD indices before and after using the app.

In the first group, participants watched a brief video of themselves washing their hands. Participants in the second group watched footage of themselves repeatedly touching an object which prompted their disgust, such as a toilet bowl. The third group acted as a control, where participants watched themselves performing random hand movements. This video had no therapeutic value and was only used to test the effect of watching a video on the phone. The participants were instructed to use the app four times a day for seven days and their symptoms were measured before and after use of the app.

Aside from these promising results, the participants gave feedback that suggests how important an app could be in treating OCD. One participant of the hand-washing group said: “If I am commuting, for example on the bus, and touch something contaminated and can’t wash my hands for the next two hours, the app would be a sufficient substitute.”

A participant in the contamination group also commented: “My contamination and washing tendencies reduced a lot. For example, if I put the rubbish out and touch the bin I would normally wash my hands immediately. But after I started to use the app I felt like it would be silly to wash my hands…”

Using our smartphone app to reduce OCD symptoms in people with contamination fears may be useful to complement existing therapies in patients with an OCD diagnosis. OCD patients could use the app in their own work or home environments or while travelling. With more research, it could also be possible that this app may provide an alternative form of treatment, particularly for OCD patients who have recently developed OCD symptoms, or for those who find it more convenient to use technology.