There are a lot of misconceptions surrounding pregnancy, and you’ve probably heard all of them. Don’t eat sweets. Don’t exercise, and for the love God, stay away from coffee. But one of the biggest myths is that mid-life pregnancies — you know, like all those celebs getting pregnant after age 40 (gasp!) — are extremely dangerous and should be avoided at all costs. But that just isn’t true. While yes, there are added risks — according to the March of Dimes, being pregnant after age 35 makes certain complications more likely — the truth is that later-in-life pregnancies are really no big deal. Plenty of parents are conceiving well into their fourth decade, their fifth decade and beyond — and those healthy, happy kids are pretty lucky to have parents who have careers, experience and their shit together in general.

The fabulous celebrities ahead are proof positive that you can be smart, chic, pregnant and over 40 all at once. Yep, it’s true. So the next time some relative of yours starts blathering on with unwanted advice about your biological clock or “advanced maternal age,” take heart — and remind them how well it all worked out for Janet Jackson.

While Savannah Guthrie always wanted to be a mom, the Today show anchor wasn’t sure parenthood was in the cards. Earlier this year, Guthrie told People she thought “it was too late” for her and hubby, Michael Feldman. “[I thought] we’d lost our chance.” But Gutherie became pregnant with their first child at 42 and gave birth to their second when she was 45.

After undergoing several IVF treatments, actor and model Brigette Nielsen proudly gave birth to her fifth child in the summer of 2018. She was 54 years young!

Helen Hunt was 40 when she gave birth to her daughter, Makena Lei, seven years after giving birth to her son. “It turned out to be tougher to get pregnant than I thought,” Hunt told Ladies Home Journal.

Meryl Streep has four children — Henry, Mami, Grace and Louisa — and the youngest, Louisa, was born in 1991, days before Streep’s 42nd birthday.

Everyone’s favorite Material Girl, Madonna, has four adoptive children and two biological children whom she gave birth to 39 and 42, respectively.

While Naomi Watts loves her boys, Sasha and Kai, Watts regrets not starting a family sooner. The actress told People, she and then partner Liev Schreiber wanted more children. “I should have had more kids, started younger.”

Janet Jackson gave birth to her first child, a son named Eissa, in early 2017 at the age of 50. Eissa is nothing short of perfect, and Jackson is looking more amazing than ever.

Susan Sarandon had her daughter Eva Amurri at 39 and her sons Jack Henry Robbins and Miles Robbins at 42 and 45, respectively.

During said pregnancy, Zoe said she totally lost her taste for sweets.

“[I feel] lucky, but also I feel kind of gypped,” she joked to People. “What happened?”

Kelly Preston gave birth to her third child, Benjamin, in 2010 when she was 48 years old.

“We had been trying for quite a few years, and then of course there was a time when we weren’t, and then we started trying again. When I found out I was pregnant, I was floored,” Preston said of her last pregnancy. “I’d snuck out of bed and then came back and woke Johnny up in bed. We both started crying. It was wonderful.”

Mariah Carey gave birth to her twins, Monroe and Moroccan Cannon, at 42.

“Santa Claus comes every year and real reindeer are there, of course, as well,” Carey said in 2015 of her family traditions with the kids. “Too many traditions to name!”

When Gwen Stefani announced she was pregnant with her third baby at 43, fans were certainly surprised. But Stefani seemingly breezed through her third pregnancy and gave birth to sweet baby Apollo on Feb. 28, 2014, when she was 44.

Céline Dion didn’t just give birth to one baby at 42 years old; she gave birth to two. Dion and her late husband René Angélil welcomed twins Eddy and Nelson in 2010 after six treatments of in vitro fertilization.

The perennially ageless Julianne Moore gave birth to her daughter (and mini-me) Liv in 2002 when she was 41.

Eva Mendes broke hearts when it was revealed she was expecting a baby — because it meant Ryan Gosling was officially off the market. At 40, Mendes gave birth to baby Esmeralda in 2014 and had her and Gosling’s second daughter, Amada, in 2016 (when Mendes was 42).

Funny lady Maya Rudolph welcomed her fourth child with husband Paul Thomas Anderson in 2013 at 40 years old. Rudolph joked on Ellen that she vowed to never have a child again when she was pregnant with her third. “It’s amazing how we forget,” she laughed. 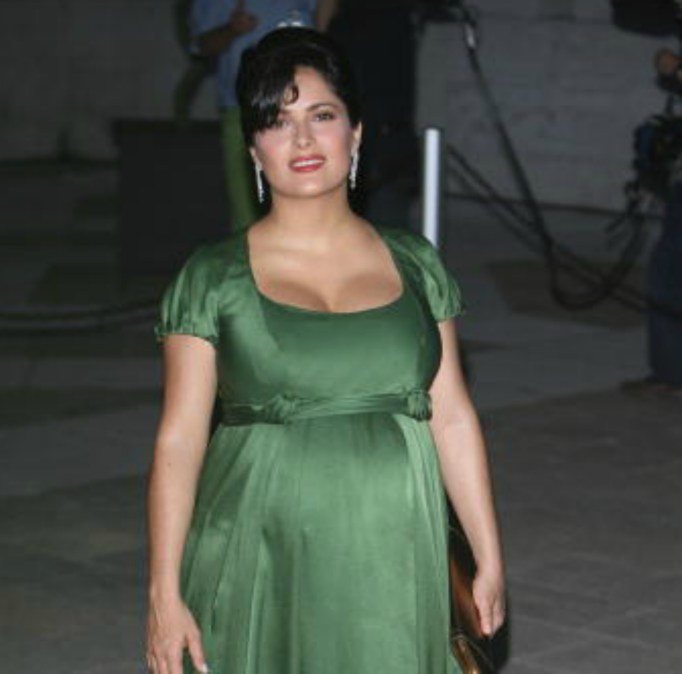 Salma Hayek had her only child, daughter Valentina, at age 41 — and for her, it was the perfect time.

In 2007, the actor said, “Motherhood is not for everyone. It is for me, but there’s no reason women should feel rushed to have a child.”

Jennifer Connelly welcomed her third baby, Agnes Lark, with hubby Paul Bettany in May of 2011 when she was 40 years old. The actor reportedly gave birth in the comfort of her home in a birthing pool.

30 Rock and The Incredible Kimmy Schmidt actor Jane Krakowski gave birth to her first child, Bennett Robert Godley, in 2011; she was 42. After the birth, Krakowski said, “Bennett is an amazing, healthy sweet boy and we are both just crazy in love with him.”

Jane Krakowski wasn’t the only 30 Rock star to give birth beyond her 30s. Tina Fey welcomed her second child, Penelope Athena, when she was 40 years old. The actor said she “agonized” over whether to have a second child — but, obviously, she decided to go for it.

Outspoken breastfeeding mama Alyssa Milano, who gave birth to her second child, Elizabella, when she was 40, is so happy she waited to become a mom. “I loved waiting a long time to be a mom,” she revealed. “I’d had my ladies’ lunches and my shopping days. When Milo finally came, I thought, ‘This is what I’ve waited for my entire life.’”

Perhaps the biggest over-40 pregnancy shocker comes courtesy of Halle Berry. The actor surprised the world when she revealed she was pregnant at age 46.

Berry, who welcomed son Maceo in 2013, told Ellen DeGeneres, “I mean, I didn’t think it was possible to have another baby and I thought for sure I had a need never to get married again. So, I’ve learned never to say never.”