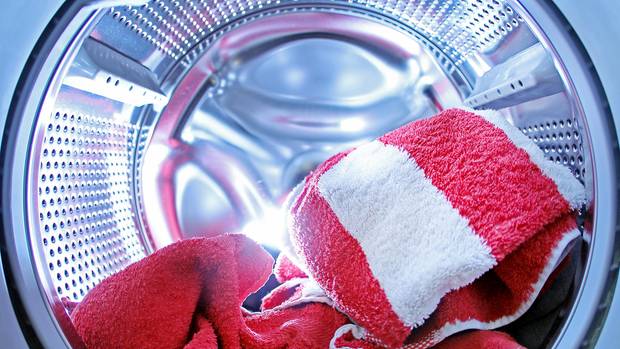 The Laundry smells fresh and fluffy out of the washing machine and is nevertheless charged possibly with germs.

The bacteria can be transmitted over the fresh Laundry to the people, as experts of the Bonn University hospital report in the journal “Applied and Environmental Microbiology”. “We have shown for the first time, that it can come through a washing machine also for the Transmission of antibiotic-resistant germs to people,” says Martin Exner, Director of the Institute of Hygiene IHPH at the University hospital.

Specifically, evidence of the researchers, the Transfer of pathogens in a children’s hospital in a commercially available washing machine. The finding also applies to the domestic sphere, and can have for certain groups of people consequences. For healthy people, using a normal washing machine, I the result of no consequences, says study leader Ricarda Schmithausen, the German press Agency. Because: “For a normal healthy people with an intact immune system, there is no danger of resistant pathogens, even if he hides such a germ in his mucus in should wear.”

A potential risk see doctors for sensitive groups of people – people with weakened immune systems, severely ill, who have chronic wounds or indwelling catheters of life, people with festering injuries or infections, as well as newborn infants.

How did the Bonn-based Institute of the thing on the track? In a children’s clinic a bacterium in newborn infants had been detected in routine tests several times to the stomach, the intestinal or respiratory tract infections can lead to a fatal Sepsis. An antibiotic would have been able to help against the identified pathogens only to a limited extent or not at all. No infection in the children’s clinic to happiness.

The bacteria was found in the rinse tray of the washing machine and in the Rubber, says Schmithausen. The germs were a cap on the gently-washed Sweater and socks came to the infants. How you were able to get into the machine, is still unclear. It is conceivable that you get into the filled Laundry is plugged or the operator-for example, if this was you on the hands. It was clear: The Trend of environmental protection and energy – saving reasons, to wash briefly and at low temperatures, could be in a health-sensitive people is counterproductive. Because in order to kill germs, it need at least 60 degrees, stresses Schmithausen. Also, the addition of chemical disinfectants in the home could be useful. The protective immune-compromised people have priority in this case, environmental aspects.

Risk for sensitive groups of people

Hygienists Christian Brandt holds the Bonn investigation for a “milestone”. You’ve long suspected, that multi-resistant pathogens are transmitted via clean Laundry from the washer to the people – now it is actually proved. “The result is not a reason for concern of the population. Only for a very small group of people cutting a certain amount of risk there is the potential,” stresses the Director of the Institute for Hygiene of the Vivantes clinics in Berlin.

Brandt makes it clear: “There are a thousand ways to colonize in the home with the bacteria of his roommate, the shower, the common bathroom, the washing machine or accidentally swapped towel. But only for an extremely sensitive group of people, this might mean a risk.”

Bacteria is everywhere, all human beings are inhabited by them. You will perish in the drought quickly, in moisture, they thrive on it. High washing temperatures, tumble dryer and iron are considered as bacteria-Killer.

Brandt assumes that there is a risk in the private sector, only in very rare cases, there is a risk of pathogens from the washing machines. However: “Unfortunately, many garments today are not washable at 60 degrees, a possible factor of uncertainty.” Even if you wash at 60 degrees, will not reach this temperature in conventional machines in Places such as drawer, pump or door often, the pathogen could survive in there possibly.

In hospitals and care facilities, a high quality since decades claim of washing procedure for hospital textiles, describes the Hygiene expert. With disinfecting washing will be washed agents and high temperatures.