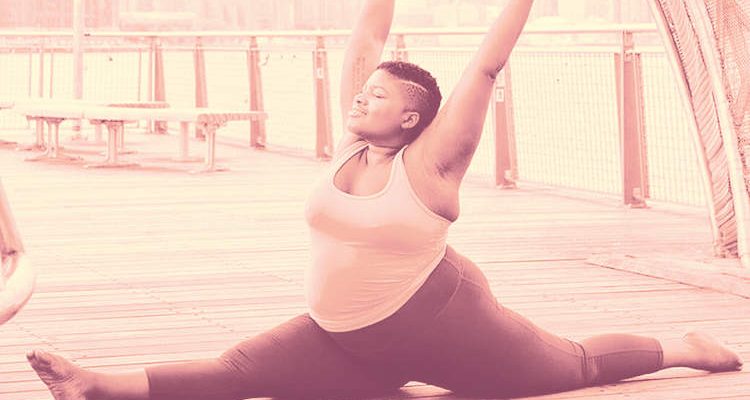 If you ask Jessamyn Stanley what her first time doing yoga was like, she’ll tell you it was hell on earth. Yep, Stanley, a yoga instructor who now travels the country to teach her many fans, hated yoga the first time she did it.

She details the experience on her blog, where she explains that her aunt dragged her to a hot yoga class when she was just 16. “When you are a whiny high school student being forced to spend your summer vacation in a sweaty and stiflingly hot yoga studio instead of camped out on your aunt’s couch watching her endless supply of VHS tapes, one 90-minute yoga session will quickly turn into a nightmare,” she wrote.

If you know anything about Stanley, you know her feelings about yoga have changed a lot since she was 16. A yoga celebrity, if you will, Stanley is now showing the world that you don’t have to have a tall, lean body type to be a pro yogi. The yoga mat doesn’t judge, and neither should we.

“I have received so many negative comments about my body in my life,” Stanley tells Health in a recent interview. “I cannot even begin to list all of them. They go from ‘You’re fat,’ ‘You’re ugly,’ ‘You’re disgusting,’ ‘You’re promoting obesity,’ ‘You’re a horrible person.’ Everything that you can think of to say, and more specifically to a fat person, has been said to me.”

But Stanley has a remarkable way of rising above the haters. She reminds herself that “anyone who says anything mean about you is just reflecting their own self-hatred.”

In fact, by reminding herself that people who try to hurt her are really just hurt themselves, she says she actually feels compassion toward them. “It makes me see that I can’t carry the weight that other people are carrying for themselves. That’s not my responsibility. And it makes it a lot easier to lift off the baggage of other people and walk on my own path.”

Stanley has never shied from walking on her own path. She’s used Instagram as a way to start a conversation around parts of being a woman that we all experience but rarely talk about. For example, she has candidly documented the scars on her thighs from chafing and the stretch marks on her stomach.

“I’m always like ‘I’m not the only one who’s feeling this, but why am I the only person who’s talking about it?’” she says. “Your body is meant to change, it’s meant to shift, it’s meant to grow.”

She’s right, and loving ourselves comes from learning to accept that. Everyone’s self-love journey is different, but for Stanley, yoga was what helped her accept herself for who she is—although if you told her 16-year-old self that, she probably wouldn’t have believed it.

“Before I started practicing yoga, I did not understand the gift that my body is,” she says. “Yoga has given me the space to understand that every part of me is necessary. Everything is exactly as it needs to be. And what needs to be silenced are the voices that make me feel otherwise.”