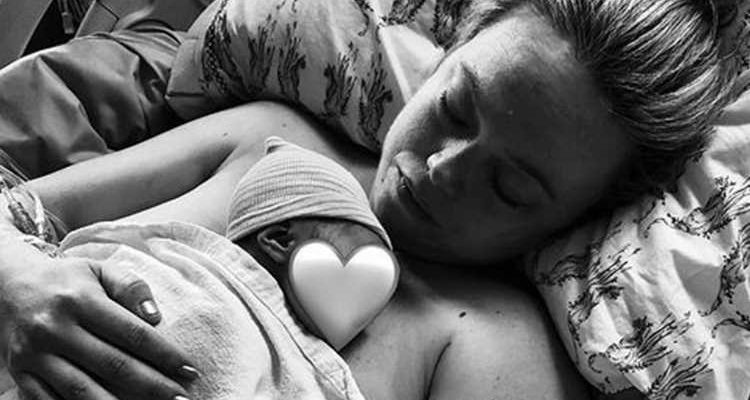 Amanda Fuller is revealing that her son Hayes Blue has a severe and rare medical condition.

The actress, 36, shared Hayes' diagnosis in an Instagram post Thursday, writing that he was diagnosed with Hemophilia B last year. Hemophilia B is a hereditary condition that results in blood not being able to clot properly because of a lack of Factor IX production.

"I can't believe it took me a year to be able to share this news publicly, but I guess one can not predict these kinds of things," Fuller wrote. The Last Man Standing actress and her husband Matthew Bryan Feld welcomed Hayes last November.

The actress also revealed that delivering her son was difficult.

"After a particularly long labor (83 hours), including 6 hours (not exaggerating, I promise) of pushing, everything at first seemed as perfect as can be expected," Fuller continued, saying that she and Feld were "instantly star struck in love" with their little boy.

While she said that Hayes had a "larger than most" hematoma on his head and "deep bruising" around his neck, the new parents "didn't think too hard" about it at first. "It seemed to add up given the traumatic nature of the birth," she said.

"For the first 36 hours post partum I think we were in blissful denial that anything could be actually wrong, immensly [sic] wrapped up in his smell and skin and tinyness [sic] and purity," she said. "It wasn't until the routine heel prick every newborn gets wouldn't stop bleeding, like a lot, that we realized something was very off."

Continuing her story in the comments section, Fuller explained that Hayes had some blood work done, and his diagnoses was given to her by two hematologists.

Fuller said that she and Feld were unprepared for the difficulties of caring for a baby with Hemophilia B and are currently learning to provide Hayes with treatments from home. "This anniversary fell on a particularly hard day. We are currently learning to give him treatments ourselves at home, a process that is not perfect nor without human error," she said. "I think any parent would agree that the worst offense to the heart is witnessing your child in pain. Being the cause of that pain is unbearable."

"But tomorrow is a new day," Fuller continued, calling her son a "true superhero."

The actress concluded by saying she and her husband are sharing Hayes' condition to gain and provide support for other families experiencing a similar circumstance.

"If sharing our story …. helps even one family out there," Fuller wrote, then "it's worth the fear of exposing this open wound." "Love to all," Fuller finished. "To Hayes Blue! We love you more than you will ever know…"

In 2019, Fuller called Hayes her "miracle baby" after learning she was pregnant despite a struggle with endometriosis.

"After battling chronic illness and endometriosis my whole life and being told for years it would be nearly impossible to get pregnant, my love and I are expecting a little miracle baby!" she told PEOPLE in July 2019. "We are shocked, terrified and elated — and just pray we can be our best selves in bringing our little angel into this world."