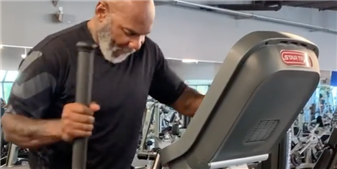 Bodybuilding legend Flex Wheeler is currently recovering from an October 2019 emergency surgery which resulted in a partial leg amputation, and he’s documenting the whole process on Instagram.

Widely regarded as one of the best bodybuilders of all time, Wheeler’s newest self-imposed fitness challenge is getting into “the best shape possible” by his 55 birthday on August 23. To make that goal happen, Wheeler has been hitting the gym daily, showing fans how he has adapted his fitness routine in the last several months to fit life as an amputee.

One video posted to Instagram on June 28 shows Wheeler working out on a leg press, impressively pressing weight with his left leg and prosthetic right leg.

“I will not be denied,” Wheeler captioned the video. “Let’s go.”

After the procedure, Wheeler explained that he knew amputation could be a possibility for a while, but was hopeful to save his right leg through medication and surgeries. However, the leg had become incredibly painful, impacting his ability to walk let alone exercise.

“I never walked this far of a distance before [the surgery] because the pain was just so great,” Wheeler says in one recent video after taking a mere 10 steps on his prosthetic leg.

I WILL WALK AGAIN .. : : : Every step I take is incredibly painful and extremely rewarding. : : : I will continue pushing myself until I’m back to a normal lifestyle. I’m looking forward to resuming my schedule, traveling globally and inspiring the world.. : : : Now, it’s go time 🔥Time to get back in shape. I have set a goal to be in the best shape possible by my 55th birthday August 23. Join me 🖤 : : : I was built for this 🙏🏾 : : Thx you @jimmy.colson @popprosthetics #nevergiveup #legend #blessed #godisgood #amputeelife #fit #pain #neuropathy

Along with being an International Federation of BodyBuilding & Fitness Hall Of Famer, Wheeler was the runner-up in Mr. Olympia in 1993, 1998 and 1999, and is is a four-time Arnold Classic winner.