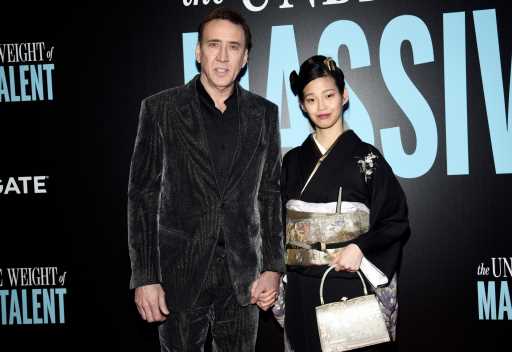 Nicolas Cage is going to be a dad again, and he shared some “big news” yesterday about the baby he’s expecting with wife Riko Shibata. The actor revealed the baby’s sex and the meaningful name they are planning on The Kelly Clarkson Show. Spoiler alert: he’s going to join the Girl Dad club!

“I’m gonna announce some big news for everyone,” he said. “I am gonna have a little girl.”

This will be Cage’s first daughter! He is already dad to Weston, 31, with Christina Fulton and Kal-El, 16, with Alice Kim. The Unbearable Weight of Massive Talent star is also a grandfather to Lucian Augustus, 7, Sorin Reid, 5, and twins Cyress Zara and Venice Zohar, 2, through his son, Weston.

“Her name is going to be Lennon Augie, Augie after my father, and I’ll call her Lenny for short,” he said. Cage’s father, August Coppola, passed away in 2009, so this is a sweet tribute to him.

“I love that!” Clarkson responded as the audience clapped. “That’s so exciting — you’re going to be a girl dad,” she added.

“It’s going to be the biggest adventure of my life,” he responded.

Cage married Shibata in Feb. 2021, after proposing to her over FaceTime and sending her a black diamond engagement ring through FedEx. He has been married four previous times, to Erika Koike, Alice Kim, Lisa Marie Presley, and Patricia Arquette.

In an interview with GQ in March, Cage mentioned wanting to name his baby Lennon Augie if it was a girl or Akira Francesco if it was a boy, after his uncle, Francis Ford Coppola.

Congratulations to the expecting couple! We can’t wait to see pictures of that cute baby girl when she’s born.